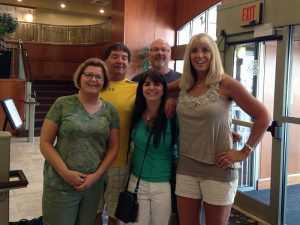 Eight years ago Niki Kapsambelis wrote a feature in the ADRC Fall Newsletter about the DeMoe family, a family of ADRC research participants with a rare genetic version of Alzheimer’s Disease, and she is now telling their story in “The Inheritance” released Tuesday, March 7th, by Simon & Schuster. The New York Post declared “The Inheritance” a “must-read” in the last week of march.

The DeMoes continue to inspire by tirelessly fighting Alzheimer’s Disease through research participation in the Dominantly Inherited Alzheimer Network (DIAN) projects and openly sharing their experience as a family.  Not only is “The Inheritance” available at book sellers across the country, news outlets are featuring Niki Kapsambelis and the DeMoes’ story and they are being invited to speak for a variety of audiences. Locally they appeared at the Peters Township Public Library in a program titled “The Battle Against Alzheimer’s” and they spoke about the”Ethics & Emotions: Insights into writing about Alzheimer’s disease” at the Women’s Press Club of Pittsburgh 126th Annual Dinner and Journalism Awards.

Read more about Niki Kapsambelis’ and the DeMoes journey in The Wall Street Journal, Pittsburgh Post-Gazette, Chicago Tribune, or The New York Times. You can also view a segment featuring them on the Today Show.