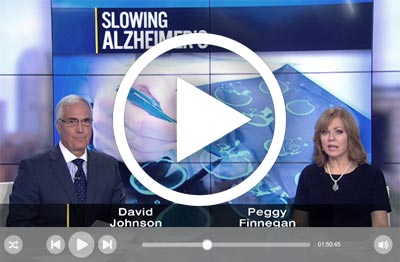 Alzheimer’s disease impacts nearly 6 million Americans. Researchers at the University of Pittsburgh are working to try and figure out why and whether it can be stopped. They say it may start with a walk around the block.

Channel 11 sat down with Linda Deafenbaugh at her home in Industry. She was only a year into her marriage to her husband, Lee, when doctors diagnosed him with Alzheimer’s disease. He was 48 at the time, and both of their lives were about to change forever.

She says he kept his spirits up by spending time outdoors.

“He was constantly walking,” Deafenbaugh said.

Researchers at Pitt say that walking could be a key to slowing dementia’s onset.

“We saw about a four-year difference in the time to dementia,” said study author Rachel Mackey, who specializes in cardiovascular epidemiology.

The recent study looked at 356 patients from our area over a 15-year period. All the study participants were dementia-free when it started in 1998. It found a key link: blood pressure.

“We know there is a relationship between vascular disease, hypertension and Alzheimer’s disease,” said Oscar Lopez, a professor of neurology and psychiatry at UPMC.

Researchers saw that dementia spread more quickly and even developed sooner in people with stiffer arteries. It found participants with high arterial stiffness were 60% more likely to develop dementia. They are still trying to figure out why that is, but they say it gave them one clear stance.

“The message for people in general is having their blood pressure under control is critical,” Lopez said.

One in 10 people over the age of 65 have Alzheimer’s disease. Researchers say the efforts to control blood pressure don’t require extreme physical activity.

There is still no cure for Alzheimer’s disease. Deaths have increased 145% and it’s now the sixth leading cause of death in the United States. Doctors say controlling blood pressure is a start, but the research still continues for a cure.

“It decreases the risk, so when we say decrease the risk, it doesn’t mean you are safe,” Lopez said.

Deafenbaugh’s husband died a few months ago at 56 years old. His family is encouraged by this latest research.

“If there’s something that can hold it off, if it’s as simple as walking, by all means, I would recommend it to anyone,” Deafenbaugh said.

She believes more money needs to come in for more studies. In the meantime, she has this message for families dealing with dementia right now.

“Don’t give up hope,” she stated. “Once you do, you are pretty much signing your own death certificate.”