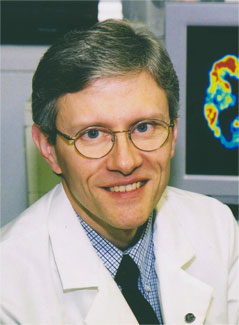 William E. Klunk, MD, PhD has been elected to the National Alzheimer’s Association Board of Directors and Chair of the Medical and Scientific Advisory Council for the upcoming 2014-2015 term.

One of the nation’s leading experts in the early detection of Alzheimer’s disease, William E. Klunk, MD, PhD, is a pioneer in the field of in vivo amyloid imaging in humans.  His work spans from basic synthetic chemistry and neuropharmacological evaluation of amyloid imaging tracers to human positron emission tomography (PET) studies of these tracers.  His group’s paper on imaging the pathology of Alzheimer’s disease, published in January 2004, is the most frequently cited research paper on this disease. Dr. Klunk also was a member of the Pitt team that invented the groundbreaking Pittsburgh Compound B (PiB). PiB is a radioactive compound that, when coupled with PET imaging, can be injected into the bloodstream to enable researchers to visualize the brains of people with the memory-stealing illness and see the location and distribution of the beta-amyloid plaque deposits associated with Alzheimer’s.

Dr. Klunk completed a dual medical and post-doctoral degree at Washington University in St. Louis focusing on neuropharmacology and medicinal chemistry.  He then completed a general psychiatry residency at the University of Pittsburgh, followed by a fellowship in geriatric neuropsychopharmacology at the same institution.  He is a member of the Medical and Scientific Advisory Council of the National Alzheimer’s Association and has published over 100 journal articles and book chapters. He is principal investigator of several National Institutes of Health and foundation grants and has received a MERIT Award from the National Institute on Aging.  Dr. Klunk shares the 2004 MetLife Foundation Award, the 2008 Potamkin Prize and the 2009 Ronald and Nancy Reagan Research Institute Awards for research in Alzheimer’s disease with his University of Pittsburgh colleague Chester A. Mathis, PhD.