The hallmark clinical feature of Alzheimer’s disease (AD) and related dementias (ADRD) is decline in cognition, which is typically assessed via paper-and-pencil neuropsychological tests in a clinic or laboratory setting. While traditional neuropsychological assessments have excellent descriptive and predictive utility, they fail to fully capture an individual’s cognitive functioning in daily life. This gap is due to many reasons, including that 1) a single snapshot of cognition is susceptible to sampling error due to day-to-day fluctuations in sleep, stress, daily activities, etc., and 2) testing occurs in environments drastically different from everyday life. In addition, traditional neuropsychological tests were originally developed to measure overt cognitive impairment in the context of clinical syndromes such as stroke or dementia. As such, subtle cognitive declines that occur early in the ‘preclinical’ phase of dementia are not easily detectable with traditional neuropsychological tests. The recent development of ambulatory cognitive evaluations (ACE) allows for a more nuanced evaluation of cognition in everyday environments. ACE are brief (<3 minutes) cognitive assessments administered via a smartphone app several times per day (i.e., “burst” assessments) over the course of several days and can be used to quantify intraindividual variability in behavior.

Assessing cognition outside of a controlled clinical setting means that fluctuations in mood, activities, interpersonal context, and other everyday factors that occur in natural settings will influence cognitive performance. These factors greatly increase the complexity of cognitive assessment. We propose to leverage this variability into an asset by testing how context may drive fluctuations in cognition in individuals at risk for ADRD. Social context can be measured in terms of objective factors such as social engagement and social networks, as well as perceived factors such as social support and loneliness. Both of these factors are associated with cognitive decline and development of AD pathology (Holt-Lunstad et al., 2010; Kuiper et al., 2015, 2016; Donovan et al., 2016; Biddle et al., 2019). However, these studies looked at social context at a single timepoint in a clinical environment, without considering the fluctuations that occur in a natural environment. Further, we propose evaluating psychological processes including valence (positive or negative) of social interactions to understand the overall psychosocial context. The proposed study will use this new ACE technology to 1) evaluate intraindividual cognitive variability in older adults who are at risk for developing ADRD, and 2) examine the coupling between psychosocial context and cognitive variability in a natural environment.

In order to conduct this developmental project, we will capitalize on ongoing Pitt ADRC-associated R01 studies. Co-Is Snitz and Cohen both lead studies of aging and cognitive decline that include longitudinal assessments of cognitive function, lifestyle factors, and neuroimaging (including PiB-PET). The proposed project would recruit from these cohorts for an ACE protocol consisting of burst cognitive assessments (3x/day) for one week. We will capture three ambulatory cognitive measures: processing speed, executive function, and spatial memory. We will also conduct ecological momentary assessments (EMA) of the psychosocial context occurring at the time of ACE collection. EMA questions will query the psychosocial context including objective factors (current activities, interpersonal interactions), perceived factors (alertness, loneliness, satisfaction), and current mood. We hypothesize that measuring cognition via repeated assessments in a naturalistic environment is a more ecologically valid and sensitive measure of everyday cognition, and that ACE will improve the detection of individuals at greatest risk for ADRD. As such, we propose the following specific aims:

Test the feasibility and adherence of using a novel ACE protocol in older adults. Hypothesis: Older adults will be willing to engage in the newly developed protocol and will complete at least 60% of the assessments, in line with estimates provided from other studies of older adults using ACE and EMA.

Validate ACE against traditional ADRD risk measures and characterize intraindividual cognitive variability in older adults at risk for cognitive decline. Hypothesis: Non-demented older adults a) with greater amyloid burden, b) who are APOE4 carriers, and c) who perform worse on traditional neuropsychological tests will show the greatest variability on ACE measures.

Neurovascular coupling (NVC) is the temporal relationship between neural activity and cerebral blood flow. This neural-evoked hemodynamic response is fundamental to local cerebrovascular homeostasis. Several lines of evidence point towards aberrant NVC in Alzheimer’s Disease (AD), especially in the prefrontal cortex (PFC)1-4. In AD, psychotic symptoms, delusions, and hallucinations, are frequent (AD+P), and AD+P subjects have greater cognitive impairment than AD subjects without psychosis (AD-P). Several studies that have evaluated cognitive domains suggest a frontal localization of the greater cognitive deficits in AD+P5-8. Blood flow studies have consistently revealed greater hypofrontality, particularly in bilateral frontal and prefrontal cortex in AD+P than in AD-P subjects1-4. The mechanism(s) behind the greater disruption in NVC in AD+P than AD-P subjects is unknown, in part because the neural circuits responsible for NVC remain poorly understood.

A logical place to start looking for neuronal circuits regulating NVC is the neurons that express neuronal nitric oxide synthase (NOS1), which catalyzes the production of nitric oxide (NO), a potent vasodilator. To accomplish this goal, we developed quantitative multiplex fluorescence in situ hybridization (FISH) methodologies for use in patient postmortem tissue. In human PFC, NOS1 expression is mostly confined to one-half of the somatostatin (SST) neuron population, which powerfully regulate local neuronal activity through GABA neurotransmission9. Within the SST / NOS1 subpopulation, we identified a unique subset that co-express high levels of the tachykinin receptor 1 (TACR1) and showed that this SST / NOS1 / TACR1 subpopulation could be identified based on the expression of a single marker, chondrolectin (CHODL, which is how we will refer to these neurons in this application). The main ligand for TACR1 is tachykinin 1 (TAC1; also known as substance P), which is expressed by parvalbumin basket cells (PVBC)10,11. 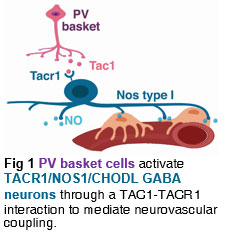 CHODL neurons are evolutionarily conserved between humans and mice (Figs 2-4). Using Tacr1CreER and PVCre mice12 vasodilation was found to be mediated, at least in part, through a microcircuit mechanism involving TAC1 release from PVBCs to activate CHODL neurons and NO-mediated relaxation of pericytes (Figs 1 & 7). Findings in schizophrenia also support the idea that PVBC and CHODL neurons form a microcircuit that plays a role in NVC, which is disrupted in the disease. Microarray analyses of TAC1 mRNA expression in PV neurons collected by laser microdissection found lower levels (-20%, p < 0.001) in schizophrenia subjects relative to unaffected comparison (CON) subjects. In contrast, TACR1 expression was +20% (p < 0.001) higher in total gray matter by RNAseq. These findings suggest that TACR1 expression is increased in CHODL neurons in an attempt to compensate for lower TAC1 release from PVBC in schizophrenia. Together, the mechanistic studies in mice and the findings in schizophrenia strongly support the idea that TAC1 released from PVBC activates CHODL neuron NO-mediated relaxation of pericytes to produce vasodilation.

We hypothesize: The PVBC-CHODL neuron microcircuit is more disrupted in AD+P relative to AD-P, explaining, at least in part, the difference in hypofrontality between the two groups. To begin to test this hypothesis, we propose the following Aim:

Determine the extent to which the PVBC-CHODL neuron microcircuit is disrupted in the PFC of subjects with AD+P and AD-P.

The data generated from the proposed studies will allow for the formulation of novel hypothesis to be tested in a future R01. For example, if our predictions are proven to be true, a logical next step will be to perform RNA-seq of pooled CHODL. RNA-seq findings could lead to the identification of cerebrovascular drug targets that are altered in AD. Novel therapeutics that improve cognition and beta-amyloid clearing could be developed based on these hits.